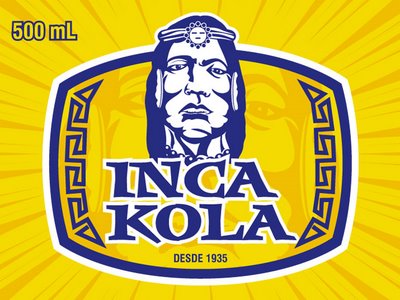 Inca Kola is a soft drink (or as I call it, pop) that originated in Peru in 1935.  It was created by an English immigrant and is as ubiquitous in Peru as Coca Cola is in the United States.  Widely popular in Peru, it does not have much of a role in foreign markets, outside of the Latin American specialty shops.  The drink is yellow in color and apparently was made from 13 different flavors derived from plants and carbonating it; strangely, the drink tastes like bubble gum (so maybe bubble gum isn’t all artificial flavor after all?).  I doubt that today it is still made from plants, but it is nice to know its humble roots were organically based!

The drink was a success and grew in popularity over the years.  During the 1940’s, Peru began experiencing a movement toward national pride and Inca Kola used this to their advantage by heavily advertising the drink with traditional Inca icons which the population slowly accepted as the unofficial drink of Peru.  (The real drink of Peru is Chicha, a corn based beer).  Since then, this drink has increased in popularity and market share and put a dent (temporarily) in the global domination of Coca Cola.

Peruvians are fiercely patriotic (much like Brazilians) and to stop supporting their “national” drink was ludicrous.  Inca Kola dominated the market and kept Coca Cola at bay.  Sometime in the 90’s, most fast food chains (notorious for serving Coca Cola products) switched from offering regular Coca Cola to Inca Kola.  Talk about a slap in the face!  Until this point, Coca Cola had never had any real competition, let alone from a much smaller operator.  Who would have thought that a small Peruvian company could take on such a goliath…and win!

I think this just goes to show what can be done by a company who knows their market and knows how to brand themselves within that market.  They definitely did not have the kind of money that Coca Cola had (and has), yet they were able to maintain so much market share that the only way Coca Cola could win was to purchase the company; which it did in 1997.  Inca Kola still owns the trademark rights within Peru and even operates the bottling process for domestic and global markets.  There are only two other smaller bottlers in the USA that supplant it. 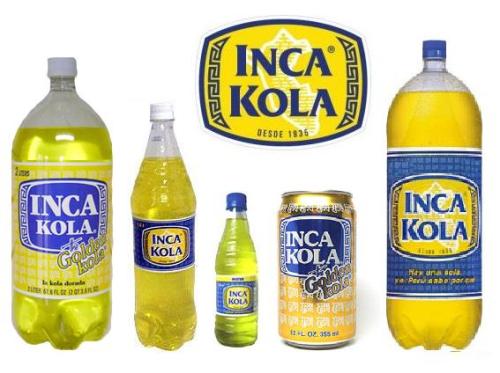